We are just days away from the most wonderful week of the year: Discovery Channel’s Shark Week. I’m not the only one who thinks this week is wonderful. Discovery Channel is encouraging social media users to start conversation using the hashtags #MostWonderfulWeek and #Sharkweek. 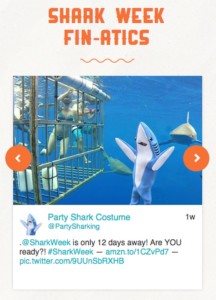 If you’re not a shark fan, it’s easy to poke fun of Shark Week, or see it as sensational. As a fin-atic, however, I want to dispel some of the misconceptions about Shark Week — starting with its origins. There’s a much bigger story to Shark Week, and it has as much to do with conservation as anything (though of course, a spike in ratings for Discovery Channel certainly helps the cable station!).

Celebrating its 28th anniversary, Shark Week is seven jawsome days, starting on July 5, devoted to everything sharks. By watching about 10 of the past 28 years, I’ve learned about species of sharks from cookiecutter to great white.

I’ve been interested in sharks since age 9 when my family visited one of Disney World’s water parks and snorkeled in the Shark Reef. I was on the verge of tears because I was so afraid that a shark would bite me, but when I worked up the courage to dive in (and had to catch up to my dad who swam ahead of me), I realized the sharks at the bottom of the reef didn’t pay any attention to me.

Discovery Channel’s main goal in presenting Shark Week each year is to to educate the public about an animal that, on average, kills one person per year. It’s not meant to scare you into never setting foot into a body of water anymore, but to inform you about a species that humans are still learning about.

With the recent attacks in the Carolinas, it is understandable why beachgoers would take caution before entering the ocean, but swimmers should realize there are many factors that have impacted the increase in attacks in the region. George Burgess, director of the International Shark Attack File at the University of Florida’s Florida Museum of Natural History, said the reasons for the attacks include:

A CDC report from the mid-2000s found that the average amount of people killed by cows per year is 20. According to National Geographic, the U.S. averages just 19 shark attacks each year. Meanwhile, in the coastal U.S. states alone, lightning strikes and kills more than 37 people each year.

After I realized that sharks are not as frightening as ‘Jaws’ makes them out to be, I became so interested in learning anything I could about them. Even as a senior in college, my interest in sharks remains, as I’m a member of the MSU Shark Club, a student organization dedicated to educating students about the importance of shark conservation and further oceanic preservation through fundraising.

My family members always post shark-related articles on my timeline on Facebook, and whenever there’s an icebreaker situation that asks to “say something interesting about yourself,” I almost always respond with, “I really really like sharks,” and go on to explain that I’m a member of the executive board of the shark club.

Shark Week starts at 8 p.m. EST on July 5 with “Shark Trek,” an episode following a team of engineers from the Woods Hole Oceanographic Institution as they try to find out why great white shark sightings in Florida are on the rise.

Two years ago, I was traveling through Europe for a study abroad program during Shark Week and reminded my parents multiple times to record each shark show that ran on Discovery Channel because I wasn’t able to watch without feeling guilty for not exploring Europe (but there was so much to learn about sharks!). I hope you’re able to enjoy Shark Week and learn about these amazing creatures!